A shamrock is a young sprig, used as a symbol of Ireland. The name shamrock comes from the Irish word seamróg, which means ‘young clover‘.

There are many varieties of shamrock. The clover flora of Ireland, which includes the shamrock, comprises fifteen different species. They are part of the pea family, would you believe?

The English botanist John Gerard defined, in his Herbal of 1597, the shamrock as Trifolium pratense, meaning red or white clover. He described the plant  as ‘Three leaved grasse‘ or ‘Medow Trefoile’. 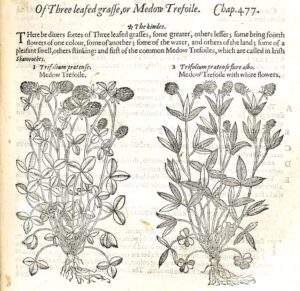 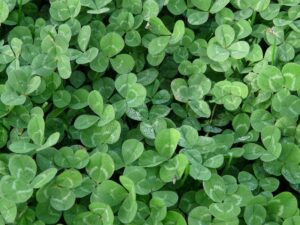 The Shamrock, from John Gerard’s ‘Herbal’ (16th century). From the archives of Canterbury Cathedral

The shamrock associated with Ireland is the Trifolium dubium.  Commonly known as the Lesser Trefoil, Lesser Yellow Trefoil, Small Hop Suckling Clover, or Little Hop Clover. This small seaside species is what some people call ‘The real Shamrock’.

The Dictionary of English Plant Names, published in 1878 by English botanists James Britten and Robert Holland, revealed Trifolium dubium as the species most frequently sold on St. Patrick’s Day, in Covent Garden, London . It further estimated at least 13 counties in Ireland also choose this particular species of shamrock.

Two further surveys,  over a hundred years on, shows our perception of the shamrock had changed very little. One survey was carried out by Nathaniel Colgan in 1893, an amateur naturalist working as a clerk in Dublin, Ireland. The other presented in 1988 by E. Charles Nelson, former director of the Irish National Botanic Gardens.

Both surveys asked people from all across Ireland to send in examples of shamrock. These samples were then planted and allowed to flower, so their botanical species could be identified.

The results of both surveys shows no one ‘true’ species of shamrock. However, almost half of Irish people did consider the Trifolium dubium (lesser clover) to be the real Irish shamrock.

Another third of the people considered the Trifolium repens (white clover) the real species. With the remaining fifth split between Trifolium pratense (red clover), Medicago lupulina (black medick), Oxalis acetosella (wood sorrel), and other species of Trifolium and Oxalis. 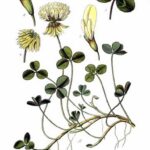 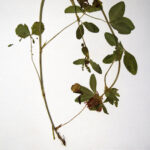 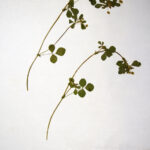 Saint Patrick, the patron saint of Ireland, is said to have used the Shamrock as a metaphor for the Christian Holy Trinity. In 1727, Caleb Threlkeld wrote that “by this three leaved grass, St Patrick set forth emblematically, the mystery of the Holy Trinity”. Though, we can’t be sure which shamrock he used

Patrick was sent to Ireland in the year 432; as a priest who could speak the language of Gaelic.  Sent to evangelise the hitherto-pagan Irish people, he had little success preaching the Gospel at first. Until that is, he presented the shamrock.

According to legend, during an impromptu sermon at the Rock of Cashel, Patrick bent over and plucked a leaf with three leaflets. Using the humble shamrock as a visual aid to explain the Holy Trinity: the father, the son, and the holy spirit. “Do you not see how in this wildflower three leaves are united on one stalk, and will you then believe that there are indeed three persons and yet one God?”

Perhaps it was Patrick’s connection to nature; how he so readily found the Holy Trinity in a common weed, that persuaded the pagan Irish to convert to Christianity.

“Every breath is a sacrament, an affirmation of our connection with all other living things, a renewal of our link with our ancestors and a contribution to generations yet to come. Our breath is a part of life’s breath, the ocean of air that envelopes the earth.”

The Druids were concerned with the natural world and its powers. They also believe numbers hold mystical powers, particularly the number three. #3 has mythical associations to pagan deities, and represents the triple aspect of ancient gods and goddesses – the Maiden, the Mother, and the Crone. Each aspect symbolises a separate stage in the female life cycle, and phase of the Moon.

The sacred number #3 is also represented in the ancient triple spiral symbol, known as the triskel. The most famous example of this Irish Megalithic symbol is the tri-spiral design engraved on the entrance stones at Newgrange. 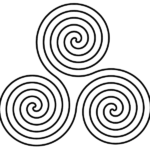 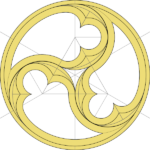 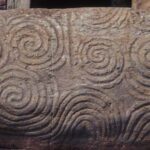 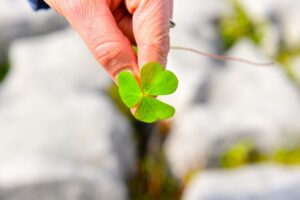 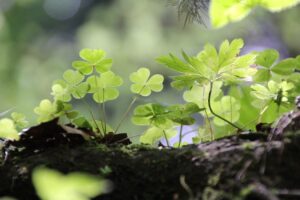 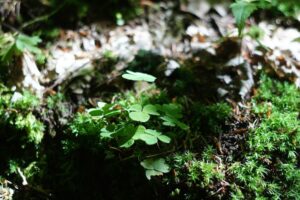 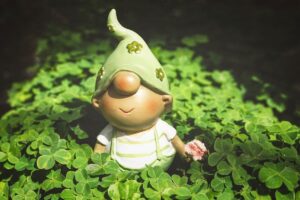 Shamrocks as food and medicine

The leaves of a shamrock plant contain potassium binoxalate, an antiscorbutis agent which can be used for preventing or curing scurvy.  It can be utilise as a ‘rub on‘ compress or poultice. In 1735 a Cork botanist Johannes Keogh further noted the use of trefoils “for phlegmons and inflammations”.

There are also many references to eating shamrocks. The first English reference, for example, was by an Elizabethan writer Edmund Campion. In 1571, in his Historie of Ireland, Campion wrote that “the Irish feed on shamrotes, water cress, other herbes, oatmele and butter”.

In the same year, a Flemish botanist, Matthias L’Obel, wrote (in Latin), that “the Irish, when maddened with hunger, ground the purple or white meadow trefoil for their cakes”.

According to Lady Jane Wilde, Oscar Wilde’s mother and poet in her own right, the shamrock,

“enlightens the brain and makes one see and know the truth“.

The three leaves of a shamrock are said to stand for faith, hope and love.
Apparently the leaves of shamrocks turn upright whenever a storm is coming. I am yet to see this phenomena for myself, though I am on the look out!

The shamrock has been used as a national symbol of Ireland since the 18th century. Around this time it became an emblem for revolutionary nationalist groups, changing it from a symbol purely associated with St. Patrick to the national symbol it is today.  In modern times, however, the shamrock takes on a far less militant meaning, now used by many state bodies to represent Ireland and Irish culture abroad.

The symbol of the shamrock is protected by law as a trademark, restricted to use on goods or services of Irish origin.

In 1952 the Irish ambassador to Washington John Hearne sent a box of real shamrocks to US president Harry S Truman. Since then it has become tradition for the Taoiseach (Prime Minister) to gift a bowl of shamrocks in a special Waterford Crystal bowl, featuring a shamrock design to the President of the United States in the White House every St. Patrick’s Day.

Following this tradition, a bowl of shamrocks will be presented by the Taoiseach Micheál Martin to US president Joe Biden today, St. Patrick’s Day 2021. This exquisite crystal bowl, has been made by Criostal na Rinne in County Waterford. 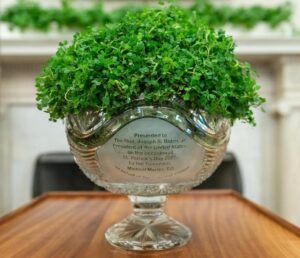 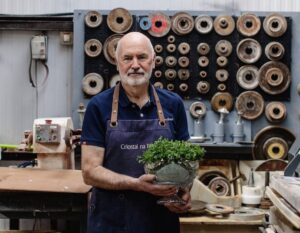 “For each petal on the shamrock. This brings a wish your way – Good health, good luck, and happiness. For today and every day.” 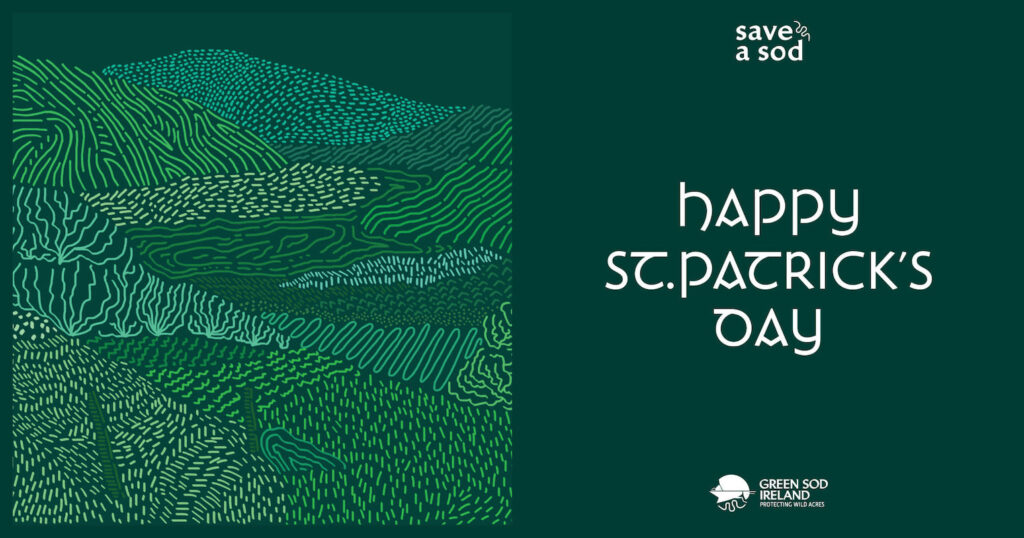 For more information on our Save A Sod campaign, and how you can help protect our Irish land and all its biodiversity, click here.